The Flying Engineer (TFE) has firmly believed in the benefits of jump-seating in the cockpit, especially for air traffic control officers (ATCOs), as it betters both the flight deck crew and ATCOs’ understanding of each other roles, responsibilities, challenges, and needs.

The Airport Authority of India (AAI) has a funny set of requirements of a potential ATCO candidate. It requires the applicant to have a degree in electronics. While it is understood that the air traffic system (ATS) relies heavily upon electronics – communication and navigation radios, radar, relays, effective ranges of VHF, and HF communication – it in no way guarantees that the ATCO of the future will be efficient in sequencing, vectoring, decision making, and importantly – understanding aviation.

For example, on 10th November, 2009, an erstwhile Kingfisher airlines’ ATR 72-500, registered VT-KAC, made an excessively steep and unstabilised tailwind approach in light rain to runway 27 at Mumbai in visual daylight conditions. When the pilot in command realised that the airplane would overrun, he steered the airplane off the runway, resulting in no injuries to the 42 persons on board. The captain’s judgement to continue the landing, despite the late touchdown, would have been justified if the runway was not contaminated- did not have patches of water, which resulted in aquaplaning, or a thin layer (plane) of water between the aircraft’s tyres and the runway surface, which reduces braking power. A pilot of the aircraft that had landed before the ATR 72 had reported aquaplaning to the ATC. It is believed that the ATCO neither understood the term nor realised the significance of the phenomenon. Had such information been relayed to the pilot, the captain may have executed a go around.

Another example is with turboprop aircraft. ATCOs often mistake these airplanes as slower – which is true only in cruise – giving jets a higher priority for landing.While typical final approach speeds on a jetliner is 140kts, turboprops can approach with as high as 200kts, and in a few nautical miles reduce to close to 100kts, due to the braking action contributed by the large propellers when at fine pitch. Many turboprop (ATR72, 42, Q400) pilots request for a higher priority, as they can land and exit the runway in the time taken for a jet to complete its approach.

TFE had visited the head office of a regional airline in India. He had a lively discussion with a C-level officer of the airline, and the general manager (GM) of sales. TFE recounted how his flight into the Tier II city where the office is located, had descended early, and vectored too far out for a landing, despite the absence of other traffic. With the airline exiting the ‘start-up’ phase and entering the ‘streamline-the-operations’ phase, fuel saving was an important consideration.

TFE had suggested flying ATCOs on board, to allow them to appreciate how every nautical mile, and every minute contributes to a huge fuel bill at the end of the year. The suggestions were met with negativity about the DGCA and the system. A challenge was taken (thanks to some beer) of showing it isn’t as hard as they believed, to get some ATCOs to fly on board, in the interest of the airline. 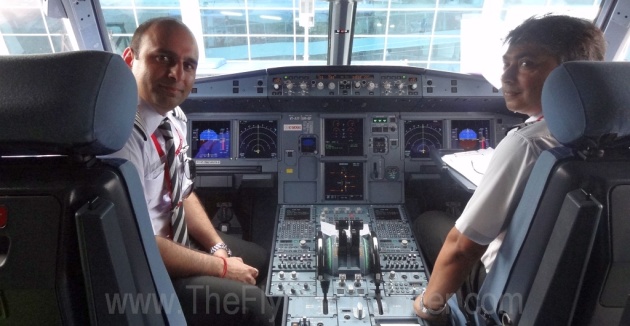 Familiarization (‘Fam’) flights have been conducted in the past. Pilots, including certain examiners of IndiGo, Jet Airways, and erstwhile Kingfisher, recall flying ATCOs in the flightdeck. The last time something like that had happened was years ago, but no-one contacted knew the how, why, what, who or how of the program.

TFE got hold of a copy of a letter issued on 6th March 2009, by the Joint General Manager of ATC-T&C, addressed to the all the Regional Executive Directors of AAI, Airport Directors of Hyderabad, Jaipur, Nagpur, Bangalore, Ahmadabad, Goa, Madurai and Bhubaneswar, and to the Deputy General Manager of Imphal, Safdarjung Airport, and Juhu. The letter listed 75 AAI employees, right from the level of Junior Executives to that of Senior Managers, posted at the airports of Ahmedabad, Banaglore, Bhubaneshwar, Chennai, Coimbatore, Goa, Guwahati, Hyderabad, Delhi-IGI, Imphal, Jaipur, Juhu, Kolkata, Madurai, Mumbai, and Nagpur, along with few from the central headquarters and regional headquarters. The letter stated,

The Airlines concerned are required to be intimated about the Familiarisation Flight Program in advance for the issue of tickets and other arrangements.

The ATCOs concerned may be advised to coordinate with the airline concerned after getting approval from concerned GM (A) / ATS-in charge for obtaining their tickets.

The Route Familiarisation Flights program of the ATCOs may be accommodated subject to the condition that there is no constraint on day to day ATC Operation.

The ATCOs on route familiarisation flight should be in proper uniform and should also display their PICs prominently. A debriefing report in the enclosed performa shall be submitted by the ATCOs to the GM (ATC) / GM (Region) immediately after completion of Fam flight with a copy to ED (ATM).”

Unlike in the United States of America (USA), airports and the air traffic system fall under the AAI, while the implementation, control, and supervision of airworthiness standards, safety operations, and crew training fall under the Director General of Civil Aviation (DGCA). The DGCA also decides on who may legally fly in the flightdeck. DGCA has an air information circular (AIC) 03/1997 which supersedes AIC 21/1985, which states:

Director General of Civil Aviation, for the purpose of securing the safety of aircraft operations hereby directs that no person shall enter the cockpit and occupy the jump seat, wherever provided of an aircraft registered in India during the flight time unless he is:

(b) Officials of the airline who have been deputed for familiarisation of flight for better practical understanding and knowledge of the functions of the instruments used in the cockpit, provided prior permission has been obtained from the pilot-in-command; or

(c) A duly authorised representative of the manufacturer of the aircraft who is required to observe the techniques used by the pilots and monitor the instruments provided prior permission of the pilot-in-command has been obtained for such entry; or

(d) Any other person authorised by the Director General of Civil Aviation, if so considered expedient by him.

The USA’s FAA has a program known as the ‘Flight Deck Training Program’. This voluntary training program allows ATCOs to fly in the cockpit of an aircraft. When asked if the DGCA has such a similar program, the disheartening reply was a ‘No’ – Not having been considered in the past, not available presently, and not planned for the foreseeable future.

ATCOs are from the AAI, and not the DGCA, though both are under the same ministry – the Ministry of Civil Aviation. When AAI was contacted, TFE got some very interesting answers from Mr. J.S. Sandhu, GM (ATC-HRD).

No. AAI only nominates officers for Familiarization flights based upon the offers received from airlines.

Officers from ATM-Cadre having experience and exposure in Air Traffic Control are nominated.

The familiarization flights are offered by the airlines.

Such information has not been documented.

It depends on the offer given by the airline and subject to approval accorded by DGCA.

Such information has not been documented.

DGCA authorizes the ATCOs to enter the cockpit for Route Familiarization Flight.

He also stated that jump seating in the cockpit, and the activities expected of an ATCO during this program are left to the airline.

As far as question 7 is concerned, the DGCA authorizes the ATCOs to fly in the deck. The DGCA somewhat contradicted itself when contacted a second time. Mr. Sunil Kumar, the Deputy Director of Regulations and Information for DGCA stated, “The DGCA is empowered to issue order under clause (d) of paragraph 4 of AIC 3/1997 to accord permission whenever Familiarization of Flight takes place by AAI or any schedule operator”, while earlier, the DGCA had mentioned that “AIC 03/1997 does not include Air Traffic Controllers”.

Familiarization flights are good for the aviation’s operational ecosystem, which comprises pilots and ATCOs. Understanding aviation terminologies, and appreciating the impact of each of their advices to airplanes can make a significant difference to both flight safety and an airline’s financial health.

It has been alleged that IndiGo seems to be given preference by Air Traffic Controls, helping them meet their on-time performance targets while also saving fuel where possible. How true this is has not been determined, but flying ATCOs in the deck has made a positive impact on how they’re treated – not necessarily out of an unsaid obligation, but perhaps out of a better understanding of operations.

Many pilots do appreciate a few ATCOs. Some pilots breathe a sigh of relief when they hear a few voices on the radio – voices of those ATCOs who have a good command over English, a good neutral accent, while also understanding aviation. While these may be cases of men and women who have pushed themselves to deepen their understanding and communication skills, the only way to meaningfully rope in the entire lot of ATCOs closer to the system is by way of such ‘Fam’ flights. Neither the DGCA nor the AAI will do it, they only allow it.

If you’re in an airline and you want to save fuel – this is your only way to better your chances of a shorter vector, and a better performance on the sector.

3 thoughts on “Familiarization Flights for ATCOs”