I had been to IIT Chennai to understand how students in the Department of Aerospace Engineering are different from those in other colleges. I had the opportunity to interact with 6 students, and I left the prestigious institute with only one feeling: “They were, they can, but they aren’t”. 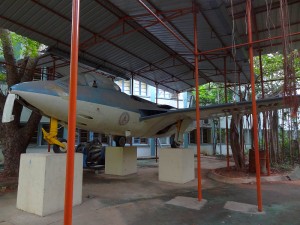 The Hawker Sea hawk, outside the IIT-M AE department, rusts without being used by the department.

One student did admit very frankly that the quality of education has diluted before his eyes. With 50 students in the final year of their undergraduate program, and 60 each in the first three years, the faculty to student ratio is reducing. Without doubt, some of the finest minds make their way to the IITs as faculty, but it honestly leaves you wondering: how much power can they exercise in transforming a rusting system of technical education?

My view isn’t in isolation; the

The Percival Prentice, literally trashed amidst trees in the IIT-M campus

World Bank sees this as well: that most “graduates” aren’t really employable. As part of a transformative program in one of the world’s leading aerospace companies, we tried to bridge the gap between company engineers and their comprehension of aircraft, aircraft systems, and their applications. We built 5 flight simulators (based on the Boeing 767), and launched comprehensive trainings that would place someone in the pilot’s seat. What we discovered was that the gap was bigger than anticipated. 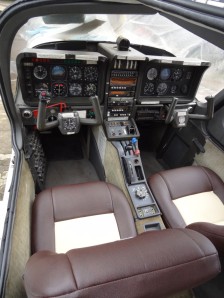 MIT Manipal sports a TB-20 single engine airplane in a working condition: atleast an airplane that may be used by the students to study and operate almost all systems

It’s pretty simple. You can’t design a good car without first having driven a car yourself, and this holds good in aviation as well. Some of the best products, best airplanes, and the best of disruptive technologies: such as Fly by Wire, have all been designed by pilots, implemented by engineers. And most engineers aren’t ordinary: the access to aviation in the west has left most, if not all, with some flying experience. But all, without exception, have “touched, felt, and kissed” an airplane.

In India, the access to aviation: be it general or otherwise, is severely restricted. Taking photos of landing airplanes is a crime in itself; seeing and “feeling” airplanes are out of question. But these are important.

You need to touch and feel an airplane to appreciate its aerodynamics. The smooth contour, wheel pants, fairings, engine inlets, the trailing edges. Honestly, aviation is an art, made reliable by science. You can’t study art and practice it. You must fly an airplane: the experience of the forces, the various interactions between the surfaces: primary and secondary, the effect of an increase in thrust on an otherwise stabilized airplane: all must be felt in order to not only design better, but to comprehend concepts in the first place.

The rusting education system in India is honestly archaic. Theory, and concepts are thrown at students, and most places expect them to read, remember, and reproduce. The emphasis on the application of concepts is almost non-existent. And without a “feel” for the subject, how does one apply? I have had professors from IIT who have honestly made a difference in my life. They took the pains to make us love the subject, by infusing the feel for every topic. They’re good. But they’re pretty isolated in their fight for a better system.

Very few realise that engineering has to do with observation, and application. The rusting education system lays emphasis on study and reproduction of studied matter.

Which infact, reflects on the Indian Aerospace sector. Barring the space launch 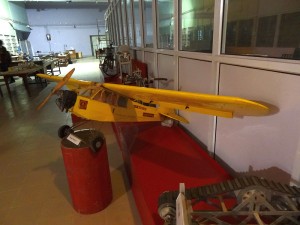 It’s good to make aeromodels, but all model designs are either from kits, or borrowed, just like the real aerospace sector in India.

vehicles, India hasn’t produced a single, wholly indigenous airplane since independence. Of those proclaimed to be “original”, they bear too striking a resemblance to western airplanes. Those that are truly original: well, they either don’t perform, or they crash. Sadly.

One admitted to not having seen a cockpit in his life, which is what the country must be blamed for. The effect of secondary control surfaces on the airplane, which couldn’t be explained, is because of the rusting (rusted?) education system that doesn’t foster much application-oriented education. The inability to explain a control in the cockpit: well, that’s the difference between a Chinese and an Indian.

The reason why the Chinese get to grips with anything, absolutely anything, may be found in the words of Harry Nelson, the Vice President of Production Flight Test, Airbus: “Learning from other people; Being big enough to learn from other people, and absorbing their enthusiasm. One of the things so interesting here (at Airbus) is that I find myself feeding off the enthusiasm of our Chinese partners. They’re so enthusiastic as they come in”.

It’s enthusiasm that drives people to self-learn, even in places where the access to aviation is highly restricted. And this enthusiasm can lead one to become an engineer who thinks like a pilot, even without having flown an airplane.

The simulator designed and made by The Flying Engineer, with analog instruments of the Cessna 172. All units are highly representative of a Cessna 172 cockpit.

My mission, through my social-

entrepreneurial company, is to make simulators accessible, and part of the aerospace curriculum in Indian technical education. To fly a simulator in a realistic environment, and get to grips with accurately modelled systems, and their effects, plays a very significant role in converting just another engineer to a passionate, and capable designer. The simulators are much, much more than mere monitor-and-desktop “bare bone” unrealistic systems as found in institutes of repute, today. And most importantly, these sims promise the infusion of the golden ingredient: enthusiasm, through realism.

It is very important to think, and have an experience like a pilot. How else does one design for the end user?

IIT- Madras has a flight simulation lab which houses a few computers. Each “flight simulator” is essentially one monitor, a PC, a keyboard, a mouse, a joystick, and a rudder pedals. They are taught to take off, land, maintain steady flight, measure a few parameters (such as AoA v/s Climb speed at a constant IAS), and study stalls. But there is absolutely no exposure to avionics, or systems. Neither is the simulator immersive, realistic and representative, nor is the curriculum comprehensive enough to award the student a holistic experience.

If you think this is unnecessary, you must be made aware that till 2009, students of aerospace engineering at IITs would make their way to IIT-Kanpur to fly in a real airplane, and perform what may be considered in flight performance analysis. The experience of flight, the feel of forces, the exposure to instruments, and more…..all cannot, I repeat, cannot be reproduced on a single screen with a joystick. Immersion, realism, and accurate system simulation are key if real flights are to be substituted by simulators.

Concluding with the words of Mr. Fernando Alonso, head of Airbus’ Flight and Integration Test Centre, “There are two test pilots and one or two test engineers on every (test) flight. The engineer is in charge and tells the pilots what to do. But he can only do that if he’s a pilot himself and knows exactly what he’s asking.”

5 thoughts on “Aerospace Engineering in India: the Gaps”