A common practice at India is the misunderstanding of technical specifications. This leads to field failures. Further effort is spent into a turtle-paced probe of the failure, and till the probe is completed, inconveniences are caused; the inconveniences leading to losses, and the losses finally blamed upon the manufacturer whose specifications were misunderstood. 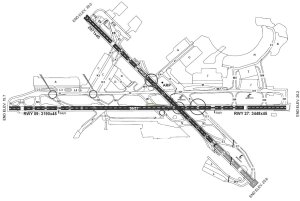 Chhatrapati Shivaji International Airport, Mumbai (ICAO: VABB, IATA: BOM) has two physical runways, one running east-west (09-27), and the other one running north-west-south-east (32-14). The east end of 09-27 is very close to a road, and the Jhari Mari slum. The proximity to the road and slum poses a safety issue, when airplanes open power for takeoff.

The jet blast, from aircraft jet engines, have been demonstrated to cause significant damage to proximate objects, such as cars, and houses. (view the video towards the end of this article) The problem is amplified in larger, and heavier airplanes, that require a significantly greater amount of takeoff thrust.

Engine Exhaust Velocities at takeoff, Airbus A380 with Trent 900 Engines

According to the Beaufort Scale of wind speeds, wind speeds in excess of 119 km/h cause “Severe structural damage to buildings”.

At Mumbai airport, when aircraft line up on runway 27 (easterly end) for a departure (takeoff), the closest approximate distance between the aircraft and a sufficiently busy road named “Magan Nathuram” is 500ft. With all sorts of vehicles: cars and tall, loaded trucks plying on the road, the risk of a jet blast’s direct and indirect damage to vehicles, and the adjacent slums, is very high, every time an aircraft takes off.

The Jet Blast shield located near the threshold of Runway 27. The visible gap in the centre is the portion that was jet-blasted away in 2012.

This necessitates a Jet Blast shield: a well designed barrier between the aircraft and the road. In 2011, a new Jet blast barrier from Blastwall, a Canadian firm, was installed. A year later, in the July of 2012, the shield gave way when a cargo plane tookoff. Along with the shield, the ILS Localizer array, located right behind the shield and responsible for Runway 09 operations, was damaged.

The Times of India brought out an article on this damaged shield, which may be read HERE. 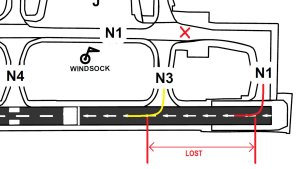 Since the July of 2012, the jet blast shield has been left damaged. Satellite images show the central section of the Jet Blast shield missing. The risk of a jet blast affecting civilians outside the airport perimeter has forced Mumbai airport to shut a part of taxiway “N1”, with the NOTAM A0900/12 stating: “PORTION OF TWY ‘N1’ EAST OF TWY ‘N3’ NOT AVBL FOR OPS”. While the ILS has been repaired, the Jet blast shield hasn’t  and as such, aircraft can line up on Runway 27 only via taxiway N3, displacing the take off point almost 1000ft ahead: a requirement to prevent Jet Blasting the locals away.

Interestingly, Blastwall has installed their shields at Toronto Pearson International Airport, and at Queenstown Airport. At Both airports, the installed jet blast shield is located greater than 530ft behind the estimated closest aircraft line up position. At Mumbai, the shield is located only about 400ft behind, subjecting it to greater stresses.

A statement from Peter Roston, President of Blastwall Ltd:

“We have provided frangible fibreglass blast walls to airports all over the world since 1998 and have never had a failure including here in Mumbai. Our specifications are clearly outlined on our web site and in fact were quoted in the purchase order we received for this wall originally. Unfortunately someone misunderstood the limitations as expressed on our site. As a result, once placed in operation, the wall was overstressed almost 100% from the specifications. Being frangible, it did as required and collapsed. In fact the wall performed exactly as designed. Both the president of our engineering company and myself flew to Mumbai to discuss the collapse , review the misunderstanding, and determine a path to correct this problem for the future. We suggested a drastically reinforced model. Eventually, after review of our specifications by the purchaser’s own engineers, this was approved and purchased. It was shipped some time ago and is at the site awaiting installation.”

The very fact that a new, reinforced jet blast shield was purchased is proof that the company was not held liable for a defective product. Peter agreed with the Flying Engineer’s view, stating, “There are only really two solutions: 1- build a stronger wall to contain a higher velocity and/or 2- move the aircraft further from the wall.” 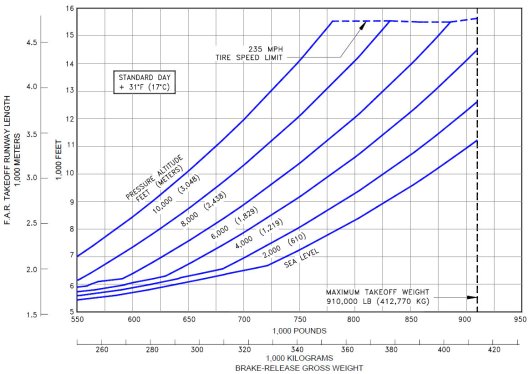 NOTAM A0900/12 is still in effect, and this introduces a payload penalty for long haul operations of large aircraft.

To better appreciate what a Jetblast can do to a vehicle, watch this 50 second video, involving an Airbus A319 (Upto 75.5 Tonnes Maximum Take Off Weight, 156 Pasengers maximum seating capacity, 2 CFM 56-5 Engines producing a max thrust of around 12,000 kg force each):