No other operator offers direct flights between the two cities.

Presently, the longest direct daily domestic flight in India is between Mumbai and Guwahati, operated only by IndiGo, with a great circle distance of 1,119 NM and a block time of 3:00 hrs from BOM-GAU, and 3:30hrs from GAU-BOM. The 30 minute difference is due to headwinds when flying from Guwahati to Mumbai, which serve as tailwinds when flying from Mumbai to Guwahati.

Thanks to Ameya: The longest domestic flight is Port Blair – Delhi (1,339 NM) operated by Air India regional on their CRJ 700s on Fridays and Sundays. 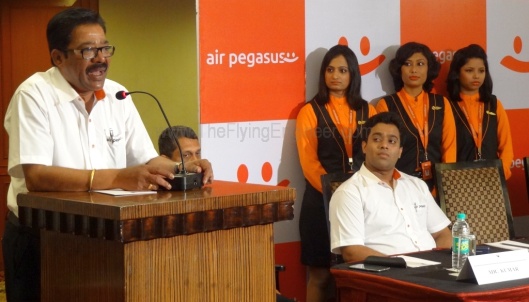 Air Pegasus (ICAO: PPL, IATA: OP) is the newest airline in the Indian airspace, and the second active airline to be headquartered in of Bangalore, after AirAsia India. The airline is a regional scheduled operator, and plans to fly a fleet of only ATR 72 aircraft.

The airline received its first ATR 72-500 on September 27th, 2014. The aircraft, with a serial number MSN 699, formerly flew for the now defunt Kingfisher airlines as VT-KAA. The aircraft, back in India to fly for Air Pegasus, is registered VT-APA.

Six months after receiving its first and only aircraft, Air Pegasus was granted its Air Operator’s Permit (AOP) by the DGCA. The airline officially ‘launched’ on April 1st, and today – April 4th 2015 – has opened for bookings.

The second aircraft, another ex-Kingfisher ATR 72, is expected by the end of April 2015. The airline plans a third ATR 72 this year, details of which are not available.

The airline plans to start operations on 12th April, 2015, with the inaugural flight from Bangalore to Hubli and back. The next day, the Bangalore – Trivandrum – Bangalore route will be inaugurated. These two stations are expected to be followed by Kochi, Chennai, Tuticorin, Belgaum, Rajmundry, Pondicherry and Madurai. Some of these stations witness good demand. However, it must be remembered that demand is a function of pricing.

Average turnaround time at the airline is 25 minutes, and the total aircraft utilization with these two sectors is 5:30 hrs. We expect the utilization to touch close to 10 hours per aircraft per day.

The airline opened for sales today, 4th April, 2015. The open for sales could perhaps have been supported by the presence of newspaper advertisements, media reports, tweets on the official Twitter account, or posts on the Facebook page. These were missing perhaps missing due to the long holiday weekend. It is learnt that the airline will launch a media campaign very soon.

Online Travel Agencies (OTA) are yet to list the airline in their searches, and may soon happen.

On the Bangalore- Hubli sector, a fully loaded ATR72 will consume around 875 litres of ATF as trip fuel, assuming a cruise at FL220. This translates to around INR 38,000 as fuel cost, including the discounted sales tax of 4% applicable to aircraft with less than 80 seats flying for a regional airline. The estimated operating cost, taking into account the low aircraft utilisation and few other factors, is at around INR 1,80,000 per flight, bringing the cost per seat on this sector to around INR 2,200, and CASK to INR 5.62.

On the Bangalore- Trivandrum sector, a fully loaded ATR72 will consume around 1,125 litres of ATF as trip fuel, assuming a cruise at FL220. This translates to around INR 49,000 as fuel cost. The operating cost is estimated at around INR 2,00,000 per flight, bringing the cost per seat on this sector to around INR 3,000, and CASK to INR 5.45.

Ticket prices on both sectors fall in eight buckets. The corresponding all inclusive fares are also shown. (deleted upon request)

Depending on the way revenue management at the airline is played with, the airline may comfortably break even with load factors of 70% +/- 10%. However, a lot of this depends on the actual demand by last minute travellers, when ticket prices usually sit in the higher buckets. This high yield D0-D7 demand is also driven by the service reputation that the airline builds over time.

The airline enjoys a monopoly on the Bangalore- Hubli route, and this will do the airline good. Air Pegasus competes with IndiGo, Air India, and Jet Airways on the Bangalore – Trivandrum sector. The airline will face certain stiff competition from IndiGo which prices its fares as low as INR 1,964.

We wish the airline all the very best in its operations.