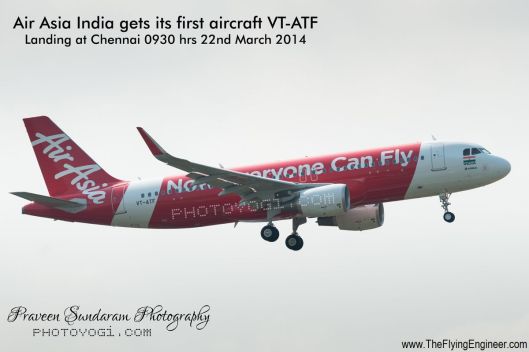 TheFlyingEnginner is proud to present the first good photograph of Air Asia India’s new A320, in Indian skies, that landed today at Chennai. Registered VT-ATF, and the 6015th A320 family aircraft to be produced, the A320-216SL is a slightly underpowered A320, but one that may fit in the scheme of operations envisaged by Air Asia India.

The photographer, Praveen “PhotoYogi” Sundaram, traveled all the way by road from Bangalore to Chennai just to catch the picture of her. He was directly invited by Air Asia India to come click the aircraft on short finals, as DGCA had not given the airline permission for any media coverage in the airport.

Praveen has permitted The Flying Engineer to be the first to upload his image. We thank you, Praveen.

Praveen is an established photographer, and has mentored some other well known aircraft/aviation photographers in the country. You may view his photos on Airliners.net, Jetphotos.net, and his website, by clicking on the links in this sentence.