With the GPS Aided GEO Augmented Navigation (GAGAN; Indian term for the country’s SBAS system) availability just a few days away, excitement is in the air, especially those who realize the benefits of the Satellite Based Augmentation System (SBAS) and the benefits it brings to aviation applications.

Today, we get to see the Wide Area Augmentation System (WAAS; US term for their SBAS system) as an option on a high sensitivity WAAS enabled Garmin receiver, and how it compares with a non-specialized commercial grade GPS receiver (A Nokia E-72 was used for this). 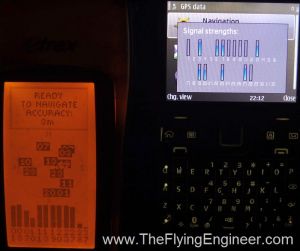 The Garmin unit picked up 11 Satellites, while the Nokia E72 picked up only 8 (blue bars). Note that the Nokia GPS cannot receive signals from satellites beyond #32.

The Garmin handheld unit (eTrex-H, now a discontinued model from Garmin, but used by many for aviation applications, though not certified for such use) features a high sensitivity receiver. With higher sensitivity, it can pick up weak GPS signals, which are too weak for standard sensitivity GPS receivers to pick up. As a result, it receives signals from more satellites, making the reported position very accurate and stable. (with a 3 meter accuracy, you can be assured of landing within 10ft on either side of a runway centreline)

The Garmin Unit’s accuracy was rock solid stable at 3 meters, while the Nokia’s accuracy fluctuated, and came nowhere close.

In addition, the Garmin eTrex-H also has a the ability to receive signals from ANY SBAS satellite, and apply the necessary corrections to make the signals more accurate. Considering that the GPS unit already has an accuracy of 3m, it may be unlikely that a greater accuracy may be noticed with the WAAS system, although the corrections will be applied. This is because, closer to the equator, the ionosphere introduces a lot many errors, which disturb the GPS signals. An SBAS attempts to provide a 7 meter accuracy; anything better than that must be treated purely as a bonus! 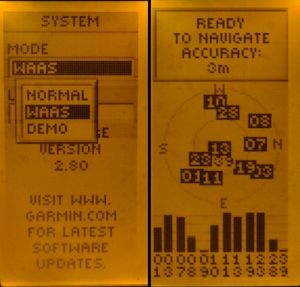 WAAS ellitenabled, and the Garmin unit looking for Satellite 39 from EGNOS

In the settings, WAAS was enabled, and as a result, the Garmin GPS unit received satellite number 37 (Jan 10) and 39 (Jan 11). A standard non-WAAS / SBAS receiver will not see more than 32 satellites. GPS satellites have a PRN (Pseudo Random Noise code that allows the receiver to decode that specific satellite’s information) between 1 and 32, both inclusive. Any satellite beyond 32 is a SBAS Satellite, part of WAAS, EGNOS (the European Geostationary Navigation Overlay Service),  MSAS (Multi-functional Satellite Augmentation System (Japanese)), or, as will be seen in a few days, the GAGAN system’s. Satellite numbers 37 and 39 are from the European EGNOS, but the corrections received will not be applied by the receiver as the satellite signals specify the area of applicability.

The GAGAN system’s satellites, with a PRN of 127 (GSAT-8) and 128 (GSAT-10), will appear as satellites 40 and 41, respectively, on a GPS receiver. Both satellites transmit the same information. That satellite from which the GPS receiver receives stronger signals will be selected. For Bangalore, this is GSAT-10 (Seen on the GPS receiver as 41).

The excitement is building!