Flight Planning registered aircraft, with departures and arrivals at recognized airfields is easy. But filing a flight plan for an aircraft that isn’t even registered with the local aviation authority (or any authority the world over), and flying into and out of mere patches of land is something else.

When flying for the State Election Commission (Karnataka, India), the need to file plans for the powered paragliding activity stemmed from a document issued to us by the Indian Air Force that needed us to obtain a ADC (Air Defense Clearance) before flying. To obtain a ADC, one must file a plan, with a copy reaching the concerned Air Force Surveillance Unit. In the process, we also obtained a FIC (Flight Information Clearance).

Although AIP ENR 1.12-1 as issued by the Airport Authority of India states, “Except local flights conducted within 5NM radius centered at ARP (Airport Reference Point) and vertical limits of 1000ft AGL of aerodrome; aircraft when operating to, through or within the ADIZ shall obtain Air Defense Clearance before takeoff, through the ATC concerned”, our instructions from the Indian Air Force clearly mentioned that we obtain a ADC for every flight, irrespective of whether we used an aerodrome or not, and despite the fact that we never climbed above 300ft AGL, and never flew beyond a 5NM radius from our departure point. There were instances when we used the aerodrome, such as that at Belgaum.

During the fag end of our pan-Karnataka powered paragliding campaign, when filing the plan for a local flight at Tumkur, the gentleman (truly one) at the other end of the phone line at Bangalore Briefing, informed me of the right order of information to be filled in the “Other Information” field of a flight plan form. Sharing this may be of help to anyone wishing to file a non-standard flight plan.

Most of our fields, including type of aircraft departure aerodrome, destination aerodrome and alternates were marked “ZZZZ”. When such is the case, here is the order:

1. Departure. (Departure location coordinates. Filled as DEP/ AABBCDDDEEF, where AA=Latitude Degrees, BB= Latitude Minutes, C=N or S for hemisphere, DDD= Degrees Longitude, EE=Minutes Longitude, F= E or W for hemsphere. It is also advisable to follow the above field with the name of the departure location in brackets, if the field has a name. Example, “KMC CRICKET GROUNDS, MANIPAL, UDUPI DISTRICT”)

2. Destination. (Destination location coordinates. Filled as DEST/ AABBCDDDEEF, where AA=Latitude Degrees, BB= Latitude Minutes, C=N or S for hemisphere, DDD= Degrees Longitude, EE=Minutes Longitude, F= E or W for hemsphere. It is also advisable to follow the above field with the name of the destination location in brackets, if the field has a name. Example, “SSM COLLEGE GROUNDS, TUMKUR”)

4. Registration. (Only if applicable. The powered para-glider, having a soft wing, needs no registration, and hence the field is left empty. Doubts raised will be answered by the next field: type of aircraft).

6. Operator. (Pretty evident. To be mentioned as OPERATOR/XXXX, where XXXX (not limited to 4 characters) is the body / person flying the aircraft. We used OPERATOR/MEGHALAYA PARAGLIDING ASSOCIATION (MPA) (ON ELECTION COMMISSION DUTY) )

7. Alternate. (When you have no airfields, mention ALTN/ALL OPEN FIELDS. This means that the paraglider (very commonly) can land at any place deemed suitable.

8. Remarks. (Other essential information. We started filling this when the Air Force units kept asking of our nationality. So, we had, REMARKS/ NATIONALITY OF OPERATOR AND ALL CREW: INDIAN)

When calling up the Air Force Units to receive the ADC, be ready to be asked many questions. Sport Aviation is looked upon with suspicion in the country. Although we had mentioned the departure and destination coordinates, we were many times asked the departure and destination location in terms of radial and distance from the closest airfield. For example, when had determined from Google Earth that Tumkur was at BIA 280°/40NM (radial 280, 40 nautical miles out). This makes it easier for them to locate, at times.

With every shift, we landed up interacting with a varied set of people, who had unique demands. Following what we’ve mentioned should help you get through 99.9% of them. Attached is a sample flight plan (click on the flight plan image on top) for reference. Happy landings!

This video, this single video, describes in absolute brief what we do, and what we face everyday. We hope to take-off at a designated time, but the winds do not always stand in our favour, making us not fly all our plans. When this video starts, you will see Nikolai explaining to the Deputy Commissioner, Bijapur, why the planned 7:00AM flight around Bijapur did not happen: he was very uncomfortable with the winds. The winds were anything but steady, and were pure crosswinds to the length of the field we hoped to use for takeoff. Wind speeds touched 20km/h, gusting. For the Powered Para Glider, which lacks a rigid wing and cruises at between 40-50km/h airspeed, such winds are anything but comfortable to fly with a trike, passenger, and a non-aerobatic para-gliding wing.

The video shows the windsock, and how it lacked direction, and was inconstant with winds experienced just 100 meters away. We also witnessed a dust-devil which (very hilariously, I must say), Nikolai verbally reacted to. Finally in the evening, when things appeared to be comparatively relaxed, but still turbulent, Nikolai took up in his aircraft his crew member, who had with him a bag full of pamphlets printed by the Election Commission, to drop from the air. Attached to Nikolai’s glide was a banner, with words in Kannada urging people to vote.

The takeoff was a close shave, as Nikolai struggled with the uncooperative winds, which forced him to use the width of the field as opposed to the length. Notice how close the powered para glider came to the football goal post and proximate trees, before climbing out to between 200 and 300ft AGL. Nikolai still had to struggle with gusts in flight!

The highlight of the day was the flight around the Gol-Gumbaz, which was requested by the Chief Election Officer at Bijapur. The Flying Engineer planned the flight, and the result is absolutely fantastic! We have the sky-down and the ground-up shots, and these make the whole day worth it. Absolutely worth the heat, the wait, the hours of disappointment, for an evening shot of the Gol Gumbaz, Bijapur! (The Gol Gumbaz (Persian گل گنبذ Gol Gombadh meaning “rose dome”) has the world’s second largest dome, after St. Peter’s Basilica. The Gol Gumbaz is the mausoleum of Mohammed Adil Shah, Sultan of Bijapur, and was completed in the year 1656 AD.)

This kind of flying is absolutely off-beat, with a non-rigid wing, low flying, and an “open” aircraft. The flights (weather permitting), co-ordination, and conduct are absolutely satisfying at the end. What finally brings a smile to us is the crowd, that cheer and look up at the aircraft. In one shot, the whole city or town is abuzz with excitement, while we drop the pamphlets, attaining our goal of effectively reaching out to almost every eligible voter in the most unexpected of ways: from the skies above.

We had two: a great flier, and a great machine. I, the third, captured this amazing man and his beautiful machine in action, at Jakkur airfield.

Nikolai Singh runs the Meghalaya Paragliders Association, and he is the only paraglider pilot recognized by the Indian DGCA. He has a quality important for an aviator: He longs to leave the ground, yet knows his limits. He is constantly aware of what’s important, always keeping safety in mind. Rarely does he say, “let’s push it”, and when he says that, he more than knows what he is doing.

Nikolai has done some amazing work for brands such a Coca Cola, Vodafone (and a lot others; I will need to spend a week with him to document the “Chronicles of Nikolai”), and has had the Election Commission as a client many a time. Laser Flying, Projector Flying, Aerial Surveys, Videography: name it, and he’s done it, all with legal permits that he diligently keeps a record of!

Here are some photos (and a video at the end of this photo-entry) capturing what takes place, in brief, before a non-rigid wings takes you to the skies. Preparation is key; safety is paramount; everything else comes much later down the line. Which is why I felt absolutely comfortable and safe flying with him.

Nikolai runs his Cruiser Powered Paraglider (PPG), minus the wing, on the runway, making sure everything is right. 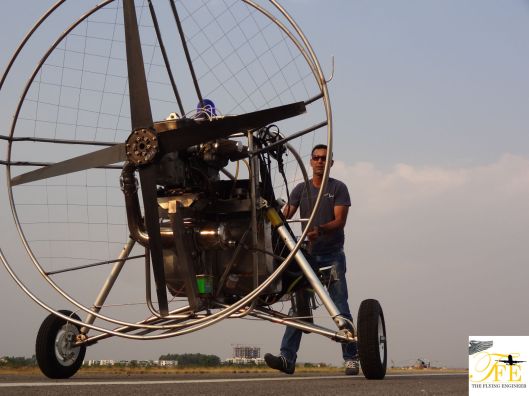 Once satisfied that all’s well, he positions the not-so-heavy Cruiser on the centreline. Honestly speaking, he doesn’t need a runway: he can take off from almost anywhere that satisfies his safety criteria.

His boys help him with the “de-flated” glider wing, securing the strings to the Cruiser. Nikolai checks every tie, to make sure all is in order. 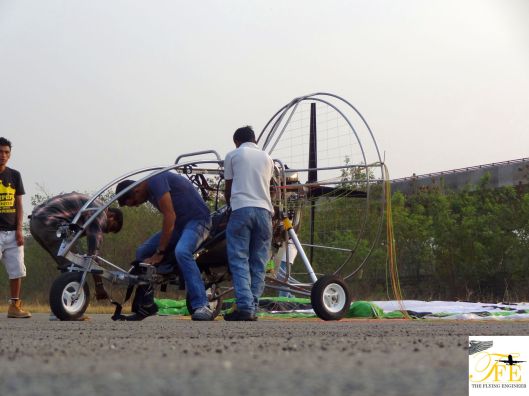 Nikolai gets in, and straps himself in place. He’s checked everything, and knows he can assure his passenger’s safety.

Nik, strapped in, grabs the stings that he plays with. By deforming the wing, he achieves roll, yaw, and aerodynamic braking. 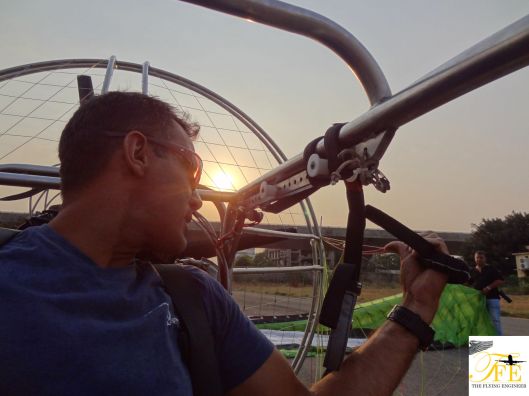 With the sun, and people he trusts behind him, he ensures the strings are free and good. 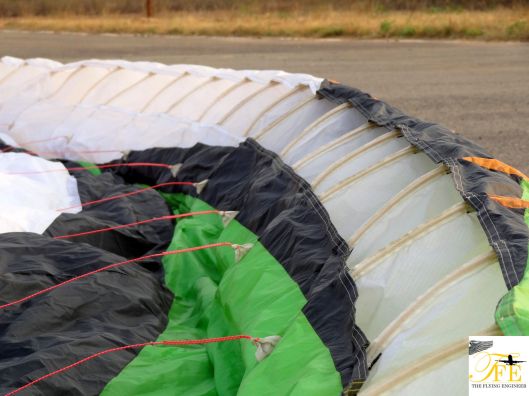 The non-rigid para-glider wing is actually more like a “biplane”. The ducts between the upper and the lower surface are responsible for the non-rigid wing to inflate and take shape, when sufficient airflow is available. By kick starting the engines, and applying take off power, the wing inflates, and rises. After that, it is sheer skill and experienced timing that ensures the wing remains up and inflated! 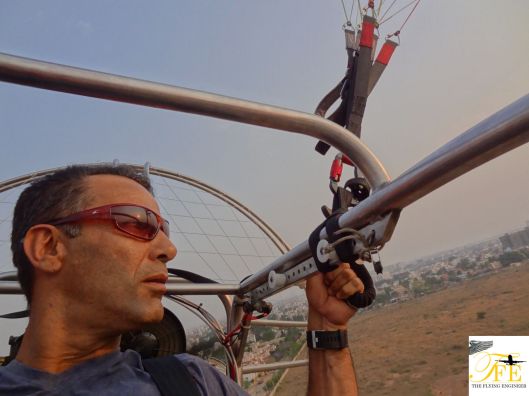 With sufficient airspeed and a well controlled wing, Nikolai takes us up, up and away, flying at between 40-50km/h!

Although the winds were significant, making Nikolai cut short the flight, the ride was smooth! One of the most comfortable air rides I’ve ever had, more comfortable and a lot more fun than that in a jetliner!

Watch a short clip here, of the takeoff: