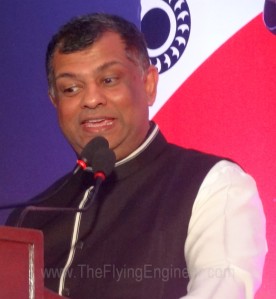 This is not about the gossip, but to make sense of the nonsense.

First, for Tony to say that he doesn’t understand ‘SpiceJet’s logic or strategy’, and that ‘the fares are unsustainable’ is a surprise. The man behind these low fares is Kaneswaran Avili, who was with AirAsia since its inception, and has also been involved with the group’s Tune Hotels and Tune Money. Kanesh drove the discounts and promo ‘sales’ at SpiceJet, and his logic is no different from AirAsia’s, but perhaps, tailored to suit to the needs of the Indian environment – and particularly SpiceJet.

Despite repeated attempts by SpiceJet to make the industry understand the too-easy-to-not-understand logic of their low fare strategy, people seem to not comprehend it. Even more surprising is the fact that AirAsia India, which claimed to sustain with the all inclusive INR 990 fares (AirAsia India CEO Mittu told TFE on June 12th: ” 990 fare for us is something that we think is sustainable”), finds SpiceJet’s ‘sale’ airfares, which are priced on average around INR 2,000, ridiculous. Or that’s what Tony thinks. Below is a snapshot of AirAsia’s low fares – far lower than SpiceJet’s. SpiceJet’s fares are almost always higher than AirAsia’s, for the same sector.

SpiceJet’s strategy is simple : determine those seats that will fly empty, and sell those seats at fares that more than cover the costs associated with transporting that discounted passenger. The result? The average yields for SpiceJet may have diluted, but the airline now records a higher – much high revenue per available seat kilometer (RASK). Which only means that on average, the airline realizes a larger revenue per flight, than it used to without these promotions and sales. Had these promos not been in place, SpiceJet would have bled further – in the face of increasing symptoms of overcapacity, with no guarantee of sold inventory or high yields.

What Tony must remember is that SpiceJet did not have the luxury of being run entirely by industry professionals throughout its existence. AirAsia has had that, and has carried no dirty laundry. SpiceJet’s performance today is awesome-for those who really know the figures-but appear terrible only because of the losses, penalties, interests, and other unwanted baggage from the past.

All that Kaneswaran has done is to implement an AirAsia strategy in SpiceJet, tweaked to ensure its optimisation for SpiceJet specifically. This has resulted in industry-wide highest loads for the year, high RASK, and working capital even in the face of a cash crunch and a meager investment of INR 300 Cr by Maran. Team SpiceJet is keeping the ship afloat.

It was perhaps poor research, poor understanding of SpiceJet’s strategy, or just a joke badly presented that drove Tony to be taken so seriously. Tony’s loose tongue lands everyone – including his airline – in trouble. For Tony to not understand SpiceJet is to not understand his own – Fares Kilpady (Vice President, Revenue Management at SpiceJet, and formerly at AirAsia X) and Kaneswaran, which is unfortunate.

What Tony doesn’t realize is that every time he or his team make a statement that counters a previous statement by Mittu, it only puts the young CEO in bad light.

Sanjiv came back with knee jerk reactions – unfortunately, even if his arguments were valid – which shows him being sucked into an unwanted word game he’s not cut out for. It’s proof that Sanjiv – a non resident Indian, with his family at London- is getting topicalised. The ‘foreigner’ jabs were uncalled for – Sanjiv is as much a foreigner in India, atleast as far as his career history shows. Mittu and Tony are a different breed, with a different mindset; but Sanjiv’s appeal as a classy COO may be waning.

Unlike Tony and Mittu who seem to have sufficient non-airline related time, Sanjiv has a big set of tasks: to walk the talk, turnaround an airline, and secure an investor (perhaps a ‘foreign(er)’?)

Meanwhile, the media & India will soon get used to Tony, and possibly not bother or read too much into each and every comment that he makes – which puts Mittu in bad light and leaves a bad after taste with the competition.