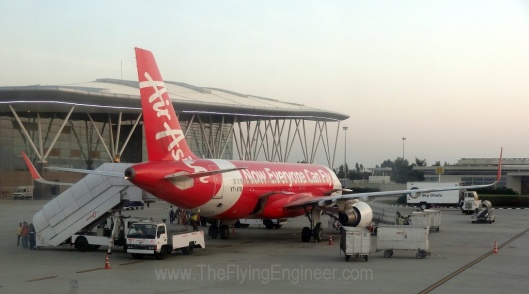 AirAsia India, an associate company of AirAsia Berhad, which owns 49% of the joint venture with Tata Sons and Telstra Tradeplace, reported an after tax loss of INR 44.1 crore for the quarter ending June 30th, 2015. The airline realised an operating loss of INR 41.8 crore in the same quarter. The first quarter is traditionally a season of peak domestic travel demand.

The airline realised an operational RASK (Revenue per available seat kilometre) of INR 2.88/seat-km, which is only 5% better than what was realised in Q4FY2015. The fourth quarter is traditionally a season of low domestic travel demand.

The airline realised an operational CASK (Cost per available seat kilometer) of INR 3.93/seat-km, which is 12% higher than what was realised in Q4FY2015.

The largest increases in unit costs were due to increases in unit maintenance costs (an increase by 105%) and unit airport costs (an increase by 175%). Increase in unit airport costs contribute to 65% of the airline’s increase in operational CASK. This is due to the airline operating from Delhi’s T3, where AirAsia India may not enjoy the same cost waivers and benefits it enjoys at Bengaluru airport. Maintenance of the aircraft occurs at Hyderabad Shamshabad’s MAS-GMR facility, which requires empty aircraft (non revenue flights, ferries) to be conducted, which is a source of cost. The opening of Delhi base may have contributed to the increase in maintenance costs. 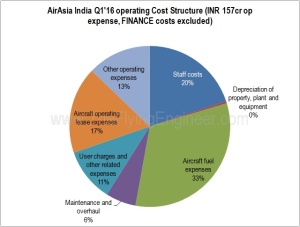 Fuel expense of INR 1.28/seat-km is similar to what was realised in Q4’15, and similar to the unit fuel costs of SpiceJet in Q1’16.

Unit lease costs have very slightly gone up, perhaps due to the two additional A320s in the airline’s fleet not being fully utilised for the first couple of weeks of opening the Delhi base.

Other operating expenses went up 21% on a unit basis.

Overall, starting operations from Delhi has negatively impacted the airline’s costs, largely due to higher airport charges and the absence of benefits at the GMR airport.

In the quarter, the utilisation of aircraft was not to the fullest. Delhi operations started midway into the quarter, and Imphal and Vishakhapatnam operations started later in the quarter. On 14th August, AirAsia in total silence launched its second Bengaluru-Vishakhapatnam frequency (we had talked about this exactly 4 months earlier), increasing the average aircraft utilisation to 13 hours. As utilisation of the assets get better, certain costs are expected to go down. With sales tax on fuel at Vishakhapatnam at only 1%, AirAsia India tankers fuel from Vishakhapatnam to Bengaluru, for the next flight – Bengaluru to Cochin. While these common cost saving measures are good, the increase in unit airport charges may be concern.

Launching of new routes, and launch promotional fares are believed to have impacted unit revenues.

AirAsia India’s per passenger revenue was nearly INR 1,380 short of operationally breaking even.

Average load factors in the airline (passengers flown) has increased to 81% in Q1’16. The airline flew its millionth passenger around August 5th (we had rightly predicted this towards late June).

Cargo carried by the airline in the quarter was a very high average of 1,074 kg per flight, which is the second highest for a LCC in India, after Go Air. IndiGo on average carried an average of 615 kg of cargo (freight and mail) per flight.

The average stage length at AirAsia India was 1,150km, which is the highest amongst LCCs in India.

The total loss incurred by AirAsia India, after tax, on Q4’15 and Q1’16 – two consecutive quarters – is INR 63.1 crore. This includes one lean and one peak season, and witness the airline culling one route (Bengaluru-Chennai), and the addition of 5 routes (Delhi – Goa/Bengaluru/Guwahati, Guwahati-Imphal, and Bengaluru-Vishakhapatnam).

In the first financial year of its operations (FY2006-07), in which IndiGo operated for only 7 whole months, IndiGo reported a loss of INR 201.8 crore. This works out to INR 101 crore for 2 quarters.

In the second financial year of operations (FY2007-08), IndiGo reported a loss of INR 234.7 crore, which works out to INR 117.35 for two quarters. While a comparison between an airline that was far more aggressive in its fleet induction and started 9 years ago is both unwise and incomparable, it is used to get a very rough (caution: may be misleading) idea of the kind of losses one may expect in two consecutive quarters.

The airline’s CASK is expected to stabilise at lower levels moving forward. However, the improvements that may be expected are not very significant. Operational CASK may fall by only around 4-5% to around INR 3.75/seat-km (for a fleet of 5 aircraft), but may remain higher than the CASK SpiceJet today enjoys. With such a CASK, AirAsia India may report a loss in Q2’16 (Quarter ending September 30th 2015).

The airline today flies 34 flights a day to 10 destinations with 5 airplanes.

A new civil aviation policy (CAP), if favourable to AirAsia India, may see the airline quickly scaling operations. A massive change in policies, however, seems unlikely.

AirAsia India’s cost performance is not bad in the context of a small airline starting a large number of new routes in the quarter. Certain performance indicators in cost and ancillaries show promise. However, unit revenues are very weak. Poor unit revenue performance is expected to continue in Q2’16, with a hope of operational break-even only in Q3’16.