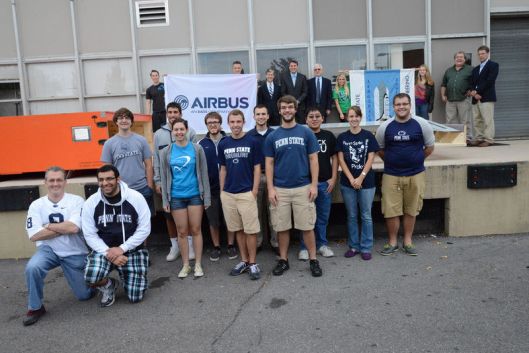 Airbus donated an Airbus A300 “like-new flap” to Penn State’s College of Engineering a few days ago.Although an extremely small and seemingly insignificant part of a complex airliner, a flap is a great start to many research activities. Flaps, which are relied on during take-offs and landings, contribute to noise, drag, and performance penalties, and studies could possibly result in better flap configurations and/or design.

Barely a week back, The Federal Aviation Administration selected Penn State as part of a team of universities to form a new Air Transportation Center of Excellence for Alternative Jet Fuels and the Environment.

Airbus ended production of the twin-engine/twin-aisle A300 in 2007. According to Airbus, “The flap, which will be used for student research, has a catalog value of more than $900,000 dollars, and represents a major research opportunity for both undergraduate and graduate students in the College’s aviation and aerospace programs. Specifically, Penn State intends to use the flap in its aerospace structures courses. Study plans include installing strain gauges inside the flap to measure strain on the internal ribs and structure of the flap by applying loads to various locations of the flap.

Airbus defines flaps as, “Hinged structures on the trailing edge of fixed wing aircraft that are used to reduce speed and increase the angle of descent for landing, safely shortening takeoff and landing distances. Flaps do this by lowering stall speed and increasing drag.”

Students at the Pennsylvania State University Department of Aerospace Engineering will examine the design of the structure, and develop models to predict how it should deform, then apply loads to the actual flap to see how close their hypotheses are.

The Indian education system needs a lot of catching up before it can hope to even perform elementary tests on aircraft sub structures.