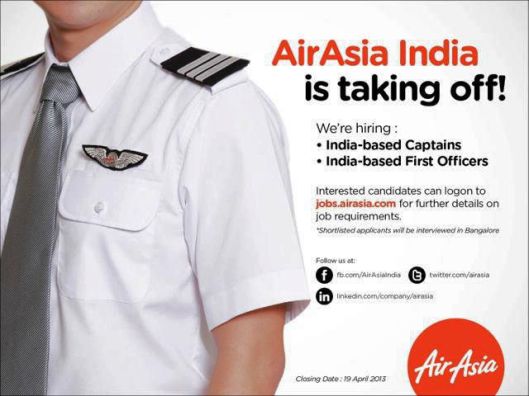 Air Asia has begun recruiting India Based Captains and India based First Officers for Air Asia-India. Last date for applying for the posts is the 19th of April, 2013. You have 5 days!

The good news is that even CPL holders without a type rating or experience on the Airbus fleet, are encouraged to apply. All you need are a minimum of 200hrs total flying time! Of course, a type rating will stand in your favour.

Applications for the position of a captain has, what is seen rarely in the Indian Industry, a minimum age limit of 26 years. Applicants must hold a valid ATPL. Senior first officers with a minimum of 5,000 hours total flying time may apply.

This news brings hope to many presently employed with Kingfisher Airlines, as they stand a very high chance of being considered. There will be an exodus of pilots from Indigo towards Air Asia, as upgrades to the rank of a captain (P1) is taking much longer than the airline had promised earlier. Low seniority numbers will tempt many first officers and commanders to jump to the new Indian airline.

Kingfisher and Indigo crew are expected to form the major chunk of flight crew at Air Asia, followed by A320 rated first officers, and CPL holders.

Air Asia specifies clearly, “AirAsia has not appointed any third party agents to recruit on our behalf. Official recruitment should only be conducted through airasia.com, official social media platforms and/or email addresses (user@airasia.com)“

Follow the link below to the official Air Asia Page where you may apply: