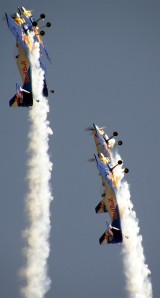 If you’ve flown a Cessna 172 with only 2 people on board, you know how the aircraft performs with its 160hp engine at approximately 1,000kgs takeoff weight. Now imagine a 720kg –all up airplane with a 300hp engine. With more than 2.5 times the power ratio of the Cessna 172R, the capabilities of Zlin Z-50LX, an aerobatic airplane flown by the Flying Bulls Aerobatic Team, can only be imagined.

When Radka Máchová, formation lead of the Flying Bulls Aerobatic Team,  sent me a message that she’ll be performing at Aero India 2013, I was all too excited to meet her again. This time though, I want everyone – who will look up to their performance in awe – to go beyond the aerobatic display, and right into the airplane, right beside the three men and one woman who bring mere metal to life.

Honestly, the first time I saw the Flying Bulls perform: it was a set of four, propeller driven colourful airplanes that left behind a trail of smoke in the sky as they flew some manoeuvres together. The flying was brilliant, the display fantastic, but I couldn’t see beyond.

I accidently bumped into Radka Máchová, when she passed the Honeywell stall that I was manning. I instantly recognized her, and got a photo clicked with the “Super Flying Lady”. She’s well known; very well known, but on ground, she doesn’t fly with the nose high. Full of energy, she left behind an aura that egged me to know more.

No phone numbers, but an internet connection was all I had to read up on Radka. With the little I knew of her, and her well founded passion for flying, I stepped out this time to watch them perform. I must tell you, their performance seemed so much better, with the thought that someone I’ve met, someone I know something about, is up there, flying that airplane. It’s no longer a machine, but a soul that’s come to life. But there’s so much more to know.

To most, the first glimpse at an airplane with propellers is, “Oh, that’s old technology”. Not really. The airplane they fly, the Zlin 50LX, is no longer in production, but its performance is something that most jets -including some fighter airplanes – cannot match.

The cockpit is absolutely simple: there are hardly any instruments, and nothing fancy that people are used to seeing in modern 4th generation airplane cockpits. This is where you start appreciating the team: It’s amazing precision in tight formations: all possible only by experience, practice, and most importantly: skill. Eyes, ears, and a good feel of the airplane: eliminate the need for the on board instruments.

Then what is it that separates these famous aerobatic pilots from the rest? What drives them to perform? What else do they do apart from flying? What did they do that got them there? What is it that they feel when they fly? All this and more, when I speak to Radka Máchová, as she gears up to fly with her team at Aero India 2013, between the 6th and the 10th of February, 2013.

A month to go!