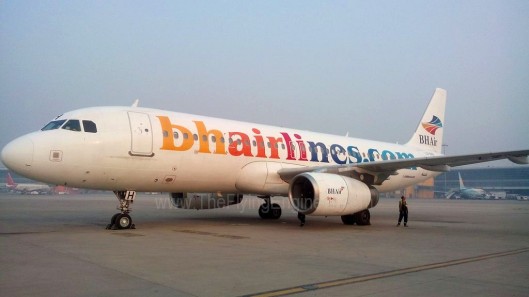 SpiceJet, which is the only low cost/fare airline in India to operate with more than one type of fleet, including Boeing 737-800s, Boeing 737-900s, Bombardier Q400 turboprops, today brought in more fleet diversity through the induction of a wet-leased Airbus A320.

The airline had wet-leased two Airbus A319s in the recent past, one of which (LZ-AOA) is still flying with SpiceJet. The A319 that is still flying for SpiceJet is from BHair (Balkan Holidays), and the Airbus A320 inducted today is also from the same operator. This is perhaps a symbol of confidence in operators in wet-leasing airplanes to SpiceJet, perhaps indicative of a more stable financial situation that allows for on-time payments. Boeing 737 wet leased aircraft that earlier flew for SpiceJet in the summer peak season have also returned for another peak-season term.

The Airbus A320 MSN 2863, registered LZ-BHH, previously flew for IndiGo as VT-INB. VT-INB was the second Airbus A320 to be inducted into IndiGo, and exited the fleet in 2012. Sale-Leaseback contracts at IndiGo were earlier for a period of 6 years, which has since been extended after 16 airplanes, following a sooner-than-needed capacity expansion after the collapse of Kingfisher in 2012.

This is the 4th wet-leased aircraft to be inducted into the SpiceJet fleet, this month. The first two, OK-TVX and OK-TSF, both Boeing 737-800s, arrived on October 9th. The third, OK-TVK, another Boeing 737-800, arrived on Oct 14. The airline with induct two more airplanes by the end of October, priming itself for the winter peak season.

Besides all the visible innovations that SpiceJet is grabbing the headlines for, the airline is doing certain other things quite differently.

Any airline will like to make the most of a peak season by increasing flights, and providing increased connectivity and flight options. There are two ways to do this : by growing the fleet or by flying the airplanes harder. SpiceJet is doing both.

The airline does not yet seem to be ready to lease more airplanes the conventional way. It instead is wet leasing airplanes from eastern European airlines, which have capacity to spare. In the month of October, the airline will be inducting 6 Boeing 737s on a wet lease (ACMI lease) basis – which means the airline will not have to bother about flight crew, cabin crew, maintenance and insurance. Wet leases can turn out to be more expensive than a dry lease with in house crew, maintenance and insurance, but it offers SpiceJet one big advantage – to modulate its capacity to suit seasonal demand.

SpiceJet today is the only airline in India to be actively wet-leasing airplanes to bridge capacity shortfalls.

The airline presently has one Airbus A319 wet leased, and 2 of the 6 wet leased Boeing 737 NGs  to be inducted this month have arrived – OK-TVX and OK-TSF. OK-TVX flew for SpiceJet during the summer peak season, along with two other Boeing 737-800s. The two 737s arrived on 8th October, 2015.

To aggressively take on the domestic and international markets despite a small fleet of airplanes, SpiceJet has been pushing its Boeing 737s to fly much harder than usual. Some of the Boeing 737s operate 19:30hrs, 17:50 and 16:35 hrs. These patterns flown by the 737s witness the airplanes flying hard during the day, and operate long international sectors at night/early morning.

Of the LCCs in India, only two fly international – SpiceJet and IndiGo. IndiGo, which also operates late night / early morning international flights, operates its airplanes only upto 17:45hrs of utilisation, on a pattern that involves a late night Chennai-Singapore return flight. One of the airline’s patterns is all-international with just 4 flights, MAA-DXB-TRV-DXB-MAA, which uses the airplane for 17:35hrs. Both these patterns, however, are not as heavy in utilisation as SpiceJet’s.

While SpiceJet pushing its airplanes to fly harder increases revenue potential and dilutes costs, it also results in a higher chance of cascading network delays in case one flight gets significantly delayed. Having significant gaps between patterns reduces the chances of the delays of one day from cascading into the second day.

On the Q400 front, the airline pushes certain Q400s to operate upto 13:15hrs per day, with an average, network-wide utilisation of around 11:30hrs. This is good for a turboprop that operates mostly domestic. SpiceJet’s Q400 turboprops are the only turboprops in India that fly scheduled international services.